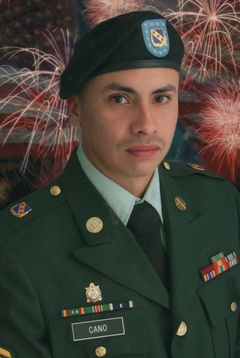 Zenon was born January 17, 1979 in Hale Center to Zenon & Janie Cano.  He graduated from Olton High School in 1997 and joined the United States Navy where he served for 8 years. After leaving the Navy, he joined the United States Army where he was currently listed as a Sergeant 1 st Class.  He married Brenda Hernandez on October 9, 2009 in Olton and had a passion for life.  He enjoyed watching the Seattle Seahawks, playing pool, dancing with his wife, barbequing and hanging out with friends; but more than anything, he loved the time he spent with his family. Known as a hero to his friends and family, SGT. Cano will always be loved and missed.

He is survived by his wife, Brenda Cano of Lubbock; two sons, Jose Cano, Kayden Cano both of Lubbock; one daughter, Kiara Cano of Lubbock; his mother, Janie Cano of Olton, one step-brother, Albert Cano of Harlingen; one sister, Celestina Cano of Plainview and a host of nieces and nephews.

He is preceded in death by his father, Zenon Natividad Cano Sr.

To order memorial trees or send flowers to the family in memory of Zenon Cano "Adrian", please visit our flower store.