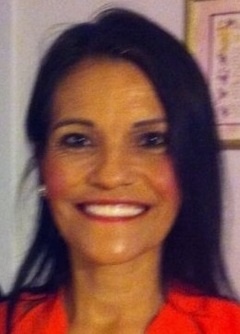 Rosary for Sharon (Adele) Mojica, 51, of Lubbock will be today at 7 PM at Broadway Funeral Directors Chapel.
Mass will be celebrated on Tuesday at 11 AM at Our Lady of Grace Catholic Church with Monsignor David Cruz officiating. Burial will be in Peaceful Gardens Memorial Park under the direction of Broadway Funeral Directors.
Sharon was called to be with the Lord on Friday January 30, 2015. She was born on May 18, 1963 in Slaton, Texas to Joe and Rigoberta Martinez.
She was married to Jessie Mojica of Lubbock. She graduated from Perkins County High School, Grant, Nebraska in 1983. She graduated from South Plains College with an Associate’s Degree in Arts and Science. She was employed at Wells Fargo as a phone banker and was a parishioner of Our Lady of Grace Catholic Church.
Sharon was preceded in death by her father Joe Martinez in 1998; sister Suzanna Martinez in 1981 and nephew Justin Martinez in 2012.
Survivors include her husband Jessie Mojica of Lubbock, two daughters,  Ashley Martinez of Lubbock and Allison Mojica of Austin; her mother Rigoberta Martinez of Slaton; three brothers, David Martinez of Lubbock, Lewis Martinez and Rick Martinez of Slaton; five sisters, Margie Martinez of Austin, Eva Smith, Mary Martinez and Lori Martinez of Lubbock, Christine Pfiffner of Arlington and grandson, Ethan.
To order memorial trees or send flowers to the family in memory of Sharon Mojica, please visit our flower store.