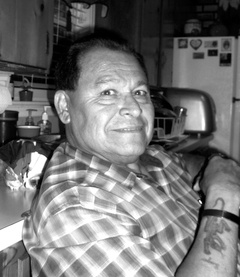 Visitation for Senovio "Ken" Lugo 76 of Lubbock will be today from 1PM till 7PM at Broadway Funeral Directors Chapel. Cremation for Mr. Lugo will be under the direction of Broadway Funeral Directors.
Mr. Lugo passed away on Wednesday, February 10, 2016. He was born on June 3, 1939 to the late Julian and Maria Lugo.
He married Alicia Buentello in August of 1958 in Lubbock and was a retired truck driver. He was known to always be smiling, was an all around handy man, loved to play mind puzzles and was often found baking in the kitchen. He loved to joke around with the family while having a Coke and pan dulce.
He taught his family to treat other people as they would have wanted to be treated and to love and care for each other.
He is survived by his wife Alicia Lugo of Lubbock,  two sons, Victor Lugo of Lubbock and Fritz Lugo of Corpus Christi, two daughters Cindy Casanica (Domenico) of Saratoga Springs, New York, and Erika Lugo of Lubbock, two brothers Ray Lugo of Lubbock and Julian Lugo Jr. of Hemet, California, five sisters, Vera Gonzalez and America Ramos both of Lubbock, Dolores Pulido of Corpus Christi, Guadalupe Mireles of Falfurrias and Juanita Vecchio of Abernathy, 6 grandchildren and 1 great grandchild.

To order memorial trees or send flowers to the family in memory of Senovio "Kenneth" Lugo, please visit our flower store.