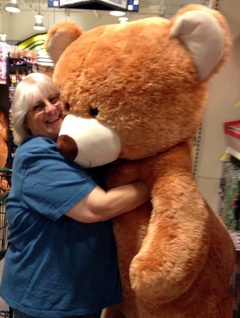 Salome “Sally” Pycior  Griggs passed away in her Lubbock home on 2-2-18 after battling with MS for 25 years. Born on 5-31-1960 in Utica, New York to Mary (Saskovitch) and Peter Pycior Sr., Sally attended and graduated from Westmoreland Central School in 1978. Shortly after, she moved to Albuquerque, New Mexico, where she earned her living off her wonderful paintings. This is where she met her future husband Richard “Big Rick” Griggs. They were married June 2, 1988 and moved to Lubbock, TX.  Married for 12 years until Rick’s sudden passing in August of 2000. Sally, a true animal lover, always had room in her home for her cherished dogs, FooFoo and later Cujo.   Sally has been a long time AT&T employee at the Lubbock Call Center.

Sally was proceeded by her parents, Peter ad Mary Pycior and is survived by her brother Peter Pycior Jr. and wife Toni of Denton

Family will hold a memorial service 10:00 am Saturday, March 3, 2018 in The Chapel of Broadway Funeral Directors.

To order memorial trees or send flowers to the family in memory of Salome Griggs, please visit our flower store.