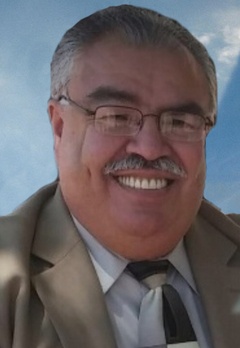 Rogelio Velez Jr., 55 passed away Saturday, March 21, 2015 at University Medical Center.  Services for Mr. Velez will be 10:00 am Wednesday, March 25, 2015 at Ministerios Nueva Vida with Pastor Jesus Cisneros officiating.  Burial at Resthaven Memorial Park will be held at a later date. There will be a Celebration of Life service held 7:00 pm tonight at Broadway Funeral Directors.

Rogelio was born August 10, 1959 in Slaton to Rogelio & Roberta Velez.  He graduated from Cooper High in 1977 and received his Bachelor’s Degree in Criminal Justice and Behavioral Health & Human Services in 1989 from Wayland Baptist University.  He served in the 501 st Battalion in the Texas State Guard and also served as a Police Officer in Tahoka, Slaton, and Levelland for 19 ½ years combined.  He married Carmen Robles on May 31, 1991 in Slaton and was a gold star dad. He was a licensed minister serveing as an evangelist for over 21 years and was named Texan of the Year in 2006 by the Dallas Morning News. Roy was also given a Congressional Honorable mention by Randy Neugebauer in 2007 and invited to attend the State of the Union message given by President George W. Bush in Washington.

To order memorial trees or send flowers to the family in memory of Rogelio "Roy" Velez, Jr., please visit our flower store.