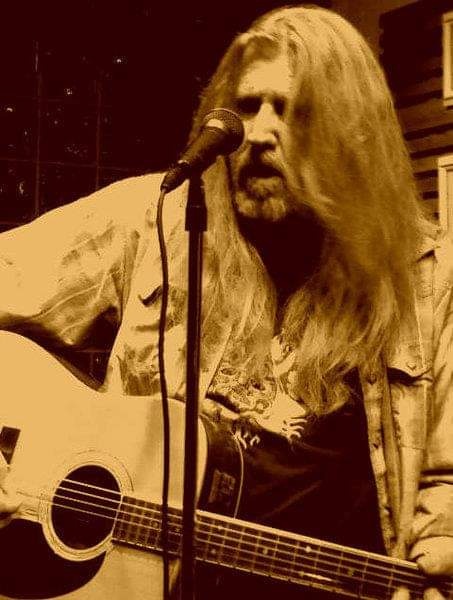 He was preceded in death by his parents, his son, Dylan Andrew Griffin, and his best friend & drummer, Shawn Bailey. He is survived by his wife Cassie Griffin, of Tahoka, his sister-in-law, Altah Cate Bailey, & his beloved nieces, Allie & Olivia Badger.

Robin was a professional musician his entire adult life. And while he managed to get more done, with less money, for longer, than anyone else, he never had a day job for very long. He played music professionally from the time he was a teenager & he died with a guitar in his hands.

His first successful regular touring band was “Rat Madness”. Rat Madness was the first Lubbock band to ever play the famous Armadillo World Headquarters in Austin, TX. He fronted numerous bands including "Skinnet Back" & "The Back Door Blues Band," which was the last band to ever play the original Stubbs BBQ, and many more. In the early 80s, he was hired by Jesse Taylor as the featured singer & rhythm guitar player for "Jesse Taylor & Tornado Alley". Jesse commented often that Robin was his favorite singer & his opinion never changed. As vocalist in "Radio Zebra," Robin had the opportunity to record with Bill Payne of Little Feat, the Tower of Power Horns, Leland Sklar, David Linley & more. By the late 80s, Robin started finding his own, very unique voice when he put together "The Robin Griffin Band“.  In the mid-90s Robin found the professional success, respect & personal satisfaction he'd strived for when he created “The Robin Griffin Group“ with Jay Hataway, Shawn Bailey & Matthew McLarty. The Robin Griffin Group would be the work he was most proud of. Also in the mid to late 90s, Robin became a lead guitar player for the first time when he teamed up with Cary Swinney. The music that Cary & Robin made together will never be forgotten.

Robin was as big a fan of music as he was a musician. He was always the biggest supporter of musicians & poets who crossed his path. Robin made no distinction between styles of music. His admiration was boundless for anyone who sincerely worked at the craft. He never lost his appreciation for talent, whether live or recorded. He spent decades just listening to artists & songs, trying to figure out how they had recorded certain tracks, or figuring out exactly how they got a certain tone. While this could (and did) drive any sane person to distraction, Robin never stopped exploring music & he never lost his wonder of music. He was always generous with his time & his talents.

Robin’s legacy will live on primarily through his songwriting. He recorded 3 albums of his own material:  “Vanilla Grits with Mojo” & “Lubbock” with The Robin Griffin Band and, his personal favorite, the solo album, “Limited Visionary”.  He also recorded with “Radio Zebra”, with Cary Swinney on “Human Masquerade”, and with Don Wise on “In Wise Hands.”

Robin Griffin was a beautiful, humorous, sly & intelligent man. In his West Texas drawl, he would tell you how it was, with no BS. He was a survivor, wrestling demons & angels, winning & losing with the same sardonic wit & sly smile he shared with bankers & bums alike.  At the end of his life, he didn’t have anything to prove other than that he could be a committed husband, which he was to his Cassie. Cassie pulled him up, helped him through & then carried him out of the hell of addiction, to which he would never return.

He will be greatly missed.

A memorial service will be held at Mi Taco Village (220 Regis) this Sunday, April 28, at 2:00 pm. Junior Vasquez will be officiating & we will release Robin's ashes into the West Texas wind. Restaurant will be open and serving food.  Please join us in remembering & honoring our Robin. Let's do this right & give him one last big crowd ...

To order memorial trees or send flowers to the family in memory of Robin Griffin, please visit our flower store.