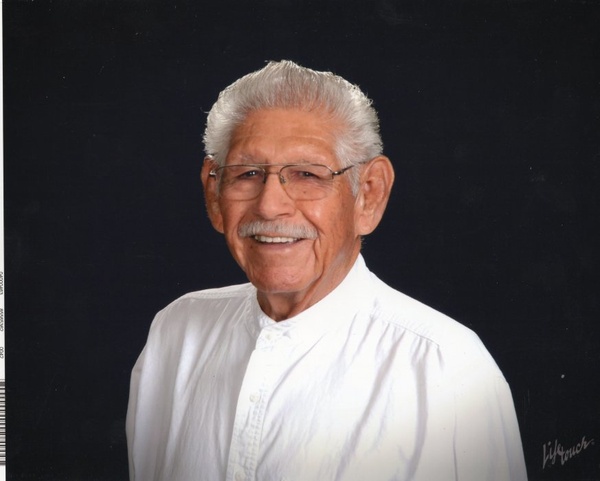 Rev. Deacon Erasmo L. Rodriguez
Erasmo L. Rodriguez, 86 of Lubbock, Texas was born November 25, 1933 in Donie, Texas to his
parents Jose G and Juanita (Lozoya) Rodriguez. He was called to eternal rest on March 22, 2020
surrounded by his loved ones. Erasmo affectionately known as “Lamo” married Olga Sanchez on
October 15, 1953 in Plainview Texas. They were married 60 years at the time of Olga’s passing.
To this union they were blessed with 6 children, 14 grandchildren, and 29 great grandchildren.
Erasmo was employed with Gifford Hill Irrigation & Supply from 1952 until his retirement in
1974, during this time he was employed as Deputy Marshall by the State of New Mexico. Then
he relocated to Ulysses, Kansas to begin his own business known as Rodriguez Irrigation from
1975-1982, while at the same time preparing for his ordination into the Diaconate Program for
the Diocese of Dodge City KS. Erasmo was appointed by the most Rev. Bishop Eugene J.
Gerber as Acolyte on October 13, 1982. Erasmo was Ordained permanent Deacon to the Diocese
of Dodge City Kansas, December 18,1983. Deacon Erasmo was then appointed as Vicar of
Hispanic affairs on July 5,1989. In the following years he was appointed as Spiritual Director of
the Cursillo movement in the Diocese of Dodge City Kansas from 1999 to 2004. During these
years he lived in Ulysses, Elkhart, Liberal, and Dodge City Kansas, which he remained for an
additional 5 years. In 2009 he returned to his original home Lubbock Texas to be closer to
family.
Viewing will be on Thursday March 26, 2020 from 10am-5pm at Broadway Funeral Directors
with a graveside service at 2pm on Friday March 27, 2020 at Peaceful Gardens Memorial Park
under the direction of Gonzales Funeral Home of La Mesa Texas and Broadway Funeral
Directors of Lubbock Texas.
Lamo is survived by his 6 children Dianna Hernandez of Lazbuddie Tx, Rodolfo Rodriguez of
Oklahoma City, Erasmo Rodriguez Jr. (Connie) of Kansas City, Angie Ortiz of Lubbock Tx,
Olga Ramirez (Joe) of Phoenix Az, Ernesto Rodriguez (Emma) of Liberal KS, 14 grandchildren,
and 29 great grandchildren. He also leaves behind 6 siblings Isabel Garza, Tirzo Rodriguez, Jose
Rodriguez, Janie Torres, Nick Rodriguez, and Pauline Rodriguez and numerous nieces and
nephews and a world full of many dear friends. He was proceeded in death by his wife Olga on
July 5, 2013 and his parents, one brother Ezequiel Rodriguez, and two sons in law Johnny
Hernandez and Jorge Ortiz.
Pallbearers: Jonas Hernandez, Joshua Rodriguez, Brian Rodriguez, Jose Rodriguez, Marc Ortiz,
Jeremy Ramirez

To order memorial trees or send flowers to the family in memory of Rev. Deacon Erasmo Rodriguez, please visit our flower store.