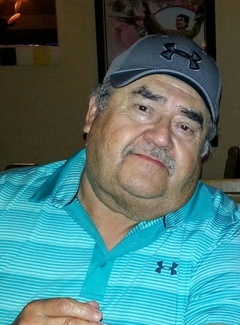 Refugio “Corky” Alcalá, 70, passed away Thursday, August 24, 2017 in Lubbock. Funeral Mass will be 10 a.m. Monday, August 28, 2017 at Holy Spirit Catholic Church with Father Rudy Creasta officiating. Burial will follow at Peaceful Gardens Memorial Park under the direction of Broadway Funeral Directors. There will be a rosary held at 6 p.m. Sunday, August 27, 2017 in The Chapel at Broadway Funeral Directors. Mr. Alcalá was born July 22, 1947 to the late Jesus and Julia Rosalez in Raymondville, TX. He later went onto marry his loving companion for forty six years Blanca Rosa Briones on September 18, 1970 in Seminole, TX; Entering into The United States Navy in 1975, Mr. Alcalá was honorably discharged as a veteran in 1979. He spent his happiest days cheering on the Texas Longhorns, playing bingo and dancing. His greatest passion however was being a grandfather and spending time with his family. He was preceded in death by his father Jesus Rosalez. Survivors include his spouse Blanca Rosa Alcalá of Lubbock; son Julian Alcalá of Odem; Daughters Elizabeth Sanchez and Ann Marie Alcalá both of Lubbock; his mother Julia Rosalez of Hobbs; Brothers Jessie Rosalez of Lovington, Ruben Rosalez of Odessa and Frank Rosalez of Hobbs; Sisters Margie Gatchell of Hobbs, Naomi Granados of Hobbs, Mari Espino of Hobbs and Susan Rosalez of Lubbock; Ten grandchildren.
To order memorial trees or send flowers to the family in memory of Refugio Alcalá, please visit our flower store.