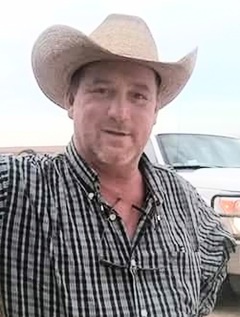 Randy Bell was born in Big Spring Texas on June 11, 1967 to Newton and Beverly Bell. He died in his sleep on Saturday, December 30, 2017 from complications of diabetes. He was an EMT and firefighter for the City of Lamesa for several years. His last job of over 10 years was a foreman and ranch manager for Charlie and Ricky Hightower.
He was preceded in death by his father, Newton Bell of Wolfforth; his brother, Ron Bell of Groveton; his grandfather Gene Holeman of Midland; and his grandparents, N.J. and JoNell Bell of Midland.
He is survived by his mother, Beverly Bell of Wolfforth; and his brother and sister-in-law, Michael and Crystal Bell of Illinois; his sister and brother-in-law, Patricia and Bill Machen of Amarillo; one sister-in-law, Cynthia Bell of Groveton; two sons, Casey and Clint Edgeman of Oklahoma; two grandsons and one granddaughter of Oklahoma; his grandmother, Mildred Holeman of Midland; and several nieces, nephews, aunts, uncles, cousins and friends.
Memorial services will be held in Midland at Cotton Flat Baptist Church, 6409 State Highway 349, on Friday, January 12, 2018, at 1:30 p.m., with Rev. Rick Holeman presiding.
To order memorial trees or send flowers to the family in memory of Randall Bell, please visit our flower store.