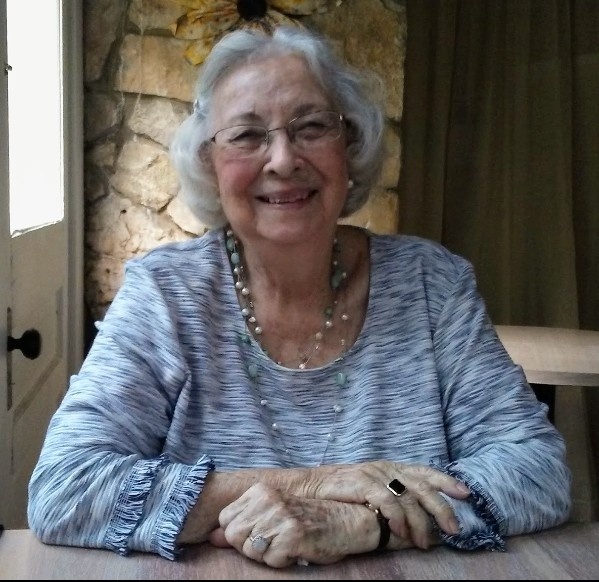 Phyllis Roberta Smith Powell passed away peacefully at her home on March 11, 2022 at the age of 92.  Born in Clyde, Texas, to Robert Phillip Smith and Jewett Stapleton Smith on October 16, 1929, her early years were spent in West Texas.  She was buried in Petersburg Cemetery alongside other members of her family.

She was working in Lubbock when she met and married C.B. Powell. They were active members of First Baptist Church.  Together they raised three children: Charlotte Powell Wallis of Boerne, James Rodney Powell, deceased, formerly of Bulverde, and John Robert Powell of Boerne.  They were married 58 years before C. B. died in 2007.

The Powell family moved to Terrell Hills in San Antonio in 1967 and retired to Boerne in 2001.  Roberta was a devoted and supportive wife and a kind and loving mother.  Her home expressed the beauty inside her.  She loved decorating and cooking and entertaining. Mom enjoyed people and made friends easily. Generous with her time, she always had a word of encouragement and hope for those around her.  We celebrated her 90th birthday in the Colonial Room at the Menger Hotel in San Antonio where she was surrounded by dear friends and family.

Roberta was preceded in death by her parents, her two brothers and her eldest son, James Rodney Powell.  She is survived by her daughter, Charlotte Powell Wallis, her son, John Robert Powell, his wife, Tonya Blakley and her granddaughter, Bailey Elizabeth Powell; her grandson James Ryan Barnett, his wife Rebecca and her two great granddaughters, Emma and Kallie Barnett of Bulverde along with many nieces and nephews.  We are grateful to have had her with us so many years.  She remained an integral part of our lives right up to the last day.  We will miss her immensely.  We love you, Mom.

To order memorial trees or send flowers to the family in memory of Phyllis Powell, please visit our flower store.