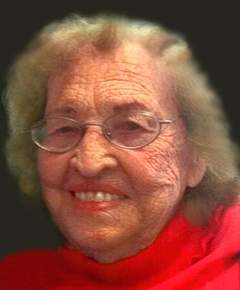 Pansy Lee McCoy, 91 of Lubbock, passed away Wednesday, December 16, 2015 at her residence.  Graveside services for Mrs. McCoy will be 2:00 pm Friday, December 18, 2015 in Smyer Cemetery with Brother Dale Maness officiating.  Burial will follow under the direction of Broadway Funeral Directors.

She was born August 5, 1924 in Nora, Virginia to the late Jackson and Sarah Turner. She married Elmer McCoy on May 2, 1946 in Nora, Virginia. They moved to Lubbock in 1963. She was a loving wife and mother; and was a devout member of the Pentecostal Church. She dearly loved cooking. She spent an extraordinary twenty-seven years cooking for the West Texas Hospital, from which she later retired. She enjoyed crocheting and loved gardening, especially growing tomatoes and peppers.

Survivors include her three daughters, Violet Lee of Shallowater, Sharon Stephenson and Gloria Cheney both of Lubbock; Seven grandchildren and fifteen great grandchildren.

To order memorial trees or send flowers to the family in memory of Pansy McCoy, please visit our flower store.