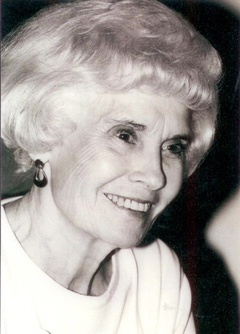 Ophelia Opperman, 89, of Austin, and longtime Lubbock resident passed peacefully from this life on May 7, 2016 surrounded by her seven children.  Ophelia was born May 31, 1926 in Silverton, TX along with her twin sister and lifelong best friend, Odelia.  They were the last of John Loyd and Lillian Esther Graham's seven children and their third set of twins.
When she was 4 years old, her family moved to Truscott in Knox County.  She graduated high school in nearby Gilliland, then moved with her family to San Angelo where she worked as a cashier and accountant for the Cactus Hotel.  She met her future husband, Arthur C. (Duke) Opperman, while working at the Galvez Hotel in Galveston.  They were married on November 27, 1946 and lived in Galveston until moving to Lubbock in 1955.  She was a housewife while she and Duke raised seven children.  She later worked in accounting at Montgomery Ward and Texas Tech University.
Arthur and Ophelia were founding members of Christ the King Church and School where she was a member of the CTK Women's Organization since its beginning.  After her retirement from Texas Tech, she was a volunteer with Covenant Lakeside Auxiliary for 15 years.  A devout Catholic, she attended the Adoration of the Blessed Sacrament weekly at Christ the King for several years before moving to Austin in 2010.
She is preceded in death by her parents and six siblings, her beloved husband of 53 years, Arthur Opperman, and her second husband and good friend, John Gaschen, son-in-law, Joseph Brock and daughter-in-law, Lynda Opperman.  Ophelia is survived by her children and spouses Diana Brock of Bedford, Arthur and Gynell Opperman of Muenster, John and Becky Opperman of Austin, Gary and Teresa Opperman of Cedar Creek, David and Sharla Opperman of Lubbock, Mary Teresa McMahan of Austin, Charles and Terri Opperman of Lubbock; 20 grandchildren and 23 great- grandchildren
Rosary will be Wednesday at 7:00 p.m. at The Chapel in Broadway Funeral Directors.  Mass of Christian Burial will be Thursday at 10:00 a.m. at Christ the King Cathedral.  Burial will follow at Resthaven Cemetery. Under the direction of Broadway Funeral Directors.
In lieu of flowers, her family suggest memorial donations to the Arthur C. & Ophelia Opperman Endowment Fund, Christ the King School, 4011-54th St., Lubbock, TX 79413.
To order memorial trees or send flowers to the family in memory of Ophelia Opperman, please visit our flower store.