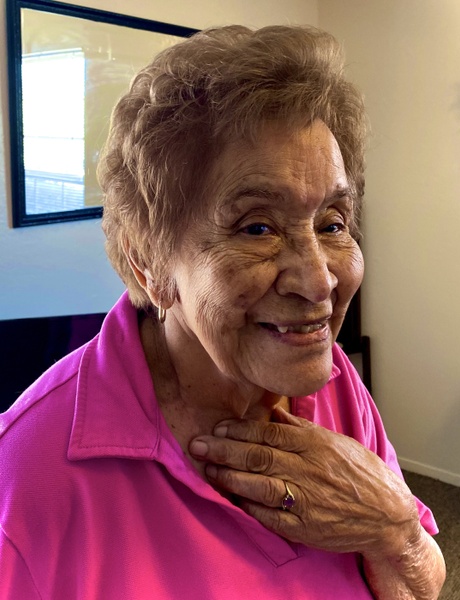 Maria M. Reyna ,86, of Lubbock was born February 28, 1934 in Saltillo, Coahuila, Mexico to Thomas & Feliciana Moreno.  She married Fernando R. Reyna Sr. in 1950 in Weslaco and was a faithful catholic, serving as a Guadalupana at Our Lady of Guadalupe Catholic Church for many years.  Although she was a housewife, her work was never done as she knew how to cook, sew, makes quilts and keep a clean household. She was good at what she did and was even hired to do the same in other’s homes. Apart from being a hard worker, Maria enjoyed Salsa & Mambo dancing, playing bingo, watching football and was a big fan of the Dallas Cowboys and Texas Tech Red Raiders. Above all, as the amazing mother she was, she enjoyed spending time with her family and grandchildren of which she had many.

Graveside services for Mrs. Reyna will be 10:00 am Monday, March 30, 2020 at Peaceful Gardens Memorial Park under the direction of Broadway Funeral Directors.

Please click here to view the video tribute
To order memorial trees or send flowers to the family in memory of Maria Reyna, please visit our flower store.