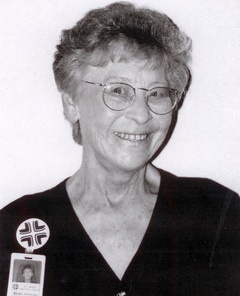 Margie was born August 15, 1931 in Amarillo to the late Walter and Inez Baird. She married R.C. Valentine, Jr. on August 5, 1949 in New Mexico. She worked as a medical transcriptionist at Covenant Medical Center for twenty five years; where she earned the Value in Action Award in Justice. She enjoyed watching Lady Raider basketball, Red Raider football and attending the Lubbock Symphony Orchestra.

She was preceded in death by her husband R.C. Valentine; a brother Walter Baird Jr.; sisters Maxine Bichsel and Virginia Ketzel.

Those left to cherish her memory are her son Richard (Barbara) Valentine of Tyler; daughter Sherri (Rhudy) Maskew of Lubbock; brother James C. Baird of Amarillo; granddaughter Courtney Wehde of Lubbock; a host of nieces and nephews.

To order memorial trees or send flowers to the family in memory of Margie Valentine, please visit our flower store.