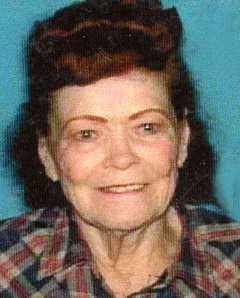 Lura L. Spalding, 94, passed away Thursday, November 30, 2017 in Lubbock. Services for Mrs. Spalding will be 10:00 am Friday, December 8, 2017 at The Worship Center with Pastor Ray Buffington officiating.   Burial will follow in Peaceful Gardens Memorial Park under the direction of Broadway Funeral Directors. Family will accept visitors starting at 6:00 pm Thursday evening at Broadway Funeral Directors.

Lura was born September 28, 1923 in Omaha, Texas to James & Hieney Collins.  She married Ray Buffington Sr. in 1941 and he passed away on October 28, 1955. She later married John Orville Porter Sr. and after his passing she later married Joe Bob Spalding in 1967, he passed away in 1988. She was a homemaker and enjoyed making her own jewelry, fixing broken dolls and upholstery.

To order memorial trees or send flowers to the family in memory of Lura Spalding, please visit our flower store.