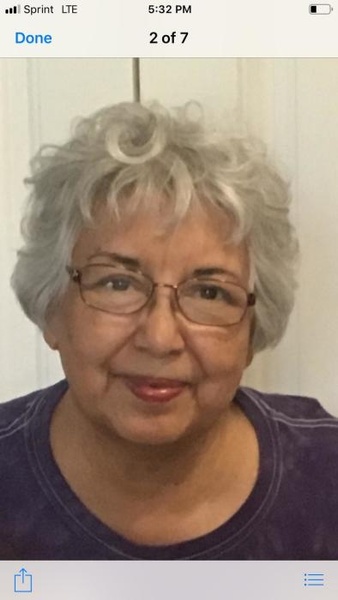 Lucy “Shea” Rivera 79 of Petersburg was born January 17, 1940 to the late Caseano and Paulita Luna Guadalcasar.

Lucy entered her heavenly home on July 27, 2019. She married Claro Rivera on April 19, 1980, he preceded her in death in 2011. Lucy worked and retired from Texas Instruments in 1995. After a brief retirement she worked for Tyco for five years.

Lucy was affectionately know by her family as “Shea”. She never had children of her own but was  like a mom to many. She cared for nieces and nephews and was always ready to care for any family member. Shea loved baking her special cakes for everyone’s birthday. One of her greatest joys was telling stories about Mark, Jordan and Matthew when she cared for them as toddlers. Shea was a selfless person who always checked on everyone to make sure everyone was doing okay and willing to help anyone in need. Shea was a faithful woman who always said, “En el nombre de Dios” before she did anything.  We take comfort in knowing she was a woman with great faith and is at peace now in her heavenly home. She is survived by her sisters, Maria Hernandez of Houston, Janie Juarez of Lubbock, Esther Villegas (Roy), Amelia Nava (Ralph), Gloria Hernandez (Juan) all of Petersburg and brothers Joe Guadalcasar (Andrea) of Petersburg, Julian Guadalcasar (the late Mary) of Slaton, Edward Guadalcasar (Maria) of Lubbock and a host of nieces and nephews. We all know she is included among the other saints in heaven to watch over us and pray for us. She loved her family with all her strength and resolve. Until we see you again Shea...We love you!  Pallbearers will be Joe Edward Guadalcasar, Mark Guadalcasar, Taylor Dorsey, Raymond Hernandez, Jordan Hernandez, Matthew Amador, Phillip Amador, Anthony Guerrero,Micah Deleon and Michael Calzada.

Be faithful in small things because it is in them that your strength lies.

To order memorial trees or send flowers to the family in memory of Lucy Rivera, please visit our flower store.