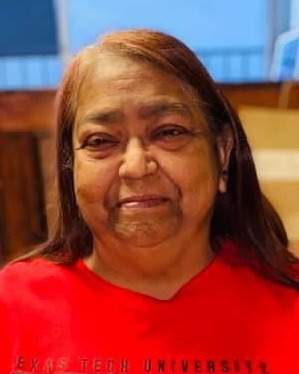 Linda Sue Lucio, 65, was born March 5, 1957, in Lubbock to Ciprano & Pauline Aguilar.  She married Lionel Lucio on February 16, 1990, in Lubbock and was a homemaker. She enjoyed Texas Tech athletics and among her other favorite things were playing bingo, cooking, making tamales, watching Tyler Perry movies and shopping at… as she would call it, “Wal-Mark”. Linda had a big heart and loved helping others any chance she had, yet nothing came in comparison to the passion she had spending time with her family, grandchildren, and great grandchildren.

She is preceded in death by her parents, Ciprano & Pauline Aguilar; one brother, Stephen Aguilar, and her sister, Isabel Boone.

Funeral Mass will be celebrated Monday, November 14, 2022, at St. Elizabeth Catholic Church with Rev. Jon Restrepo officiating. Burial will follow in Peaceful Gardens Memorial Park under the direction of Broadway Funeral Directors. A rosary will be held 6:00 pm Sunday, November 13, 2022, in The Chapel of Broadway Funeral Directors with visitation starting at 1:00 pm.

To order memorial trees or send flowers to the family in memory of Linda Sue Lucio, please visit our flower store.