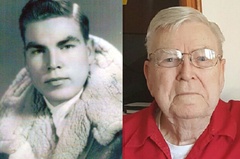 Kenneth passed away Saturday, May 27, 2017 at BSA Hospice of the South West.  He was born September 3, 1929 in Santa Anna, Texas to Edward and Lillian Modawell.  He served in the U.S. Air Force and later met Marie Voyles at Frito Lay where he worked for 38 years in Amarillo and Lubbock.  He & Marie married on July 10, 1954 in Amarillo.

He was preceded in death by Dewey “D.Mac” Brafford, Marie Modawell and two sons; Roger Dale in 1959 and Timothy Glenn in 1990.

The family suggest memorials to the American Cancer Society.

To order memorial trees or send flowers to the family in memory of Kenneth Modawell, please visit our flower store.