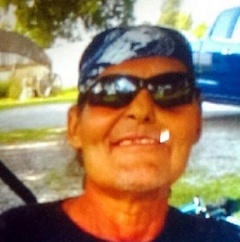 Visitation for Juventino "Tino" Salinas 57 of Lubbock will be today from 5 PM till 8 PM at The Broadway Funeral Directors Chapel. Funeral mass will be celebrated on Tuesday, at 10 AM at Our Lady of Guadalupe Catholic Church with Father Martin Pina officiating. Burial will be in O'Donnell Cemetery under the direction of the Broadway Funeral Directors.
Tino went to be with the Lord on Saturday, July 2, 2016. He was born on May 28, 1959 in Rio Hondo, Texas to Lucio and Emma Rodriguez. Tino was a retired ginner, he Love to fish and go boating. He loved to spend time with his daughter and grandchildren. He was a Dallas Cowboy fan.
He is preceded in death by a brother Freddy Rodriguez and a sister Elly Rodriguez.
Survivors include his girlfriend Lynn Goodman , a daughter Angie Lee Salinas and boyfriend Rudy Cantu of Lubbock, the mother of his daughter Yolanda Deleon , his parents Emma and Lucio Rodriguez of Oklahoma, six brothers Manuel Morales of Brownfield, Sammy Santos of O'Donnell, Johnny Rodriguez of San Antonio, Jaime Rodriguez, Isreal Rodriguez, and Michael Rodriguez all of Oklahoma, six Sisters Mary Casarez of Mt. Pleasant, Catarina Rodriguez , Carol Teel , Mela Cullins, Lucy Smith and Anna Canfield all of Oklahoma, two grandchildren.
To order memorial trees or send flowers to the family in memory of Juventino Salinas, please visit our flower store.