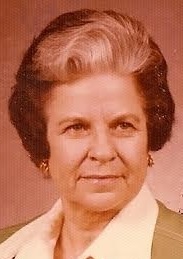 Julia Wilbanks Billingsley joined her Lord and dear Randy on Monday, February 16, 2015. She was 94 years old.

The daughter of Trixy Winn and Howell L. “Hix” Wilbanks, she was born May 20, 1920, in Dalhart, Texas. The youngest of four girls, she grew up in the Great Depression and the Dust Bowl on the family homestead near Spearman, Texas.  She lettered four years in Woman’s Basketball at Spearman High School.  In 1941, she graduated from Texas Tech University with a Bachelor’s of Science degree in Physical Education.

Always adventurous, she learned to fly and earned her Private Pilot’s License.  She taught in several Lubbock area school districts and in Santa Rosa, New Mexico. In her twenties she was named Director of the City of Lubbock Department of Parks and Recreation and served in this position until her marriage.

She married Granville Randolph Billingsley, a returning World War II G.I., on January 12, 1946 in Lubbock. She loved her husband, her children and her many friends. She loved poetry, art and nature and spent many hours gardening.  She was an avid reader, a savvy business woman and a formidable Contract Bridge player.

Julia Billingsley was a member the Heritage Study Club, Hillcrest Country Club, and served as a leader of the Bible Study Fellowship and President of the Lubbock Woman’s Club.   She was a resident of Lubbock and member of the Broadway Church of Christ since 1946.

She was preceded in death by her husband, parents and sisters, Mary W. Hazelwood, Elizabeth W. Phelps, and Ruth W. Bryan.  Survivors include her children: Dr. William R. Billingsley of Fort Worth, Gary B. Billingsley and wife, Jane, of Bedford, and Sharon Billingsley Shaw and husband, Jim, of Lubbock; five grandsons, Jeremy B. Hill and wife, Christine, of Lynnwood, Washington, Andrew R. Billingsley of Fort Worth, Jon B. Billingsley of Bedford, Alexander F. Shaw and Daniel R. Shaw, both of Lubbock; and three great-grandchildren, Joshua B. Hill, Cailin G. Hill, and Tristan J. Hill, all of Lynnwood, Washington.   Services for Julia Billingsley will be at 11:00 a.m. Friday, February 20, 2015, at Broadway Church of Christ followed by a committal service at the City of Lubbock Cemetery. The Billingsley family will receive friends from 6 until 8 p.m. Thursday, February 19, 2015, at Broadway Funeral Directors. Memorials may be sent to Hospice of Lubbock, Lubbock Children's Home, Cal Farley's Boys' Ranch or a charity of choice.

To order memorial trees or send flowers to the family in memory of Julia Billingsley, please visit our flower store.