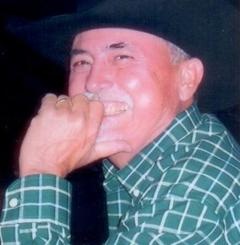 Rosary for Juan Ramon -Tattoo- Martinez, 67 of Lubbock will be this evening at 7:00 p.m., in the chapel at Broadway Funeral Directors. Funeral Mass will be celebrated at 10:00 a.m., Wednesday, in Our Lady of Guadalupe Catholic Church with The Rev. Andreas Mendoza officiating. Burial with military honors will follow in Peaceful Gardens Memorial Park under the direction of Broadway Funeral Directors.Mr. Martinez passed away October 19, 2014 in Lubbock. He was born December 6, 1946 in Yorktown, TX to the late Jose Maria and Soyla Martinez. He served in the United States Army in Vietnam from 1966-68. He married Lydia M. Mendez December 22, 1999 in Lubbock. He enjoyed fishing, going to movies and riding motorcycles; but he especially enjoyed spending time with his family and grandchildren .He was preceded in death by his parents; brothers, Juan Maria Jr, Roland, Benny, Jesus; and sisters, Rafaela and Dolores. He is survived by his wife of Lubbock; two sons, Jerry Martinez and Michael Rando of Lubbock; two daughters, Jackie Martinez of Lubbock and Andrea Banda of Levelland; two brothers, Richard Martinez Sr. and Ernest Martinez Sr., both of Lubbock; one sister, Irene Escobedo of Denton; nine grandchildren and three great grandchildren.

To order memorial trees or send flowers to the family in memory of Juan Martinez, please visit our flower store.