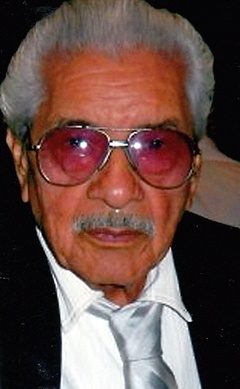 Jose L. Gomez, 88, passed away Saturday, January 27, 2018 in Lubbock. A funeral mass for Mr. Gomez will be 10:00 am, Thursday, February 1, 2018 at St. Joseph Catholic Church with Father Peter D’Souza officiating. Burial will follow at Resthaven Memorial Park under the direction of Broadway Funeral Directors. A r osary will be held 7:00 pm. Wednesday, January 31, 2018 in The Chapel of Broadway Funeral Directors.

Jose was born August 24, 1929 in Sinton to Roque & Nicholasa Gomez. Jose was a member of St. Joseph's Catholic Church. He was a great father and husband who always worked to provide for his family.  He worked for Hunt Seed Company.  Jose was a musician and played the accordion.  He played for several bands.  Jose and his brother-in-law and music partner, Juan Hinojosa also played at prayer meetings and anywhere they could so that they could minister through their music.  After retiring, he was self employed.  He cared for his wife Dominga the best he could when she became ill.  Jose loved his family dearly and would always pray for them.  He was so loved by his family and will be missed tremendously.

To order memorial trees or send flowers to the family in memory of Jose Gomez, please visit our flower store.