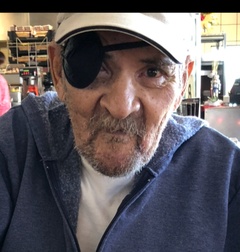 Jackie O. Gomez passed away on Tuesday, April 17, 2017. Graveside services will be held on Friday, April 27, 2018 at 10am in the City of Lubbock Cemetery.
Jack is survived by his sisters Mary Lee Garza, Florence Rivas and Diana Salinas. His brothers Gregory and Charles Gomez. His children; Stephanie Gonzales and Anthony Joe Gomez both of Lubbock and William Joseph Gomez of Utah. Jack had seven grandchildren, nine great grandchildren and two great, great grandchildren.
He is preceded in death by his wife Delores Garcia Gomez and his beloved granddaughter Celita "Sky" Monterde.

To order memorial trees or send flowers to the family in memory of Jackie Gomez, please visit our flower store.