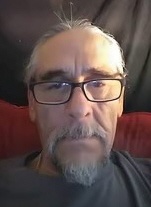 Jack Ray Ruiz, 64, was born February 4, 1956 in Portales, New Mexico to Genaro & Rita Trujillo.  Jack worked in construction for most of his life and he loved his four boys and grand babies.  He was a good man with a good soul and will be missed by all who knew and loved him.

On January 6, 2021 shortly after midnight, Jack Ray Ruiz was called from this earth.  Those left to cherish his loving memory are his four sons, Jeremy Ruiz of Wimberley, Justin Ruiz of Shallowater, Joel Ruiz of Wylie, Sam Ruiz of Portales, NM.  One brother, Henry Ruiz of Portales; as sister, Perci & Efren Urias of Portales; and nine grandchildren.

He is preceded in death by his grand-daughter, Aspen Salazar; one nephew, Hector Mario Ruiz

Services will be held at later date. All arrangements were made under the direction of Broadway Funeral Directors.

To order memorial trees or send flowers to the family in memory of Jack Ruiz, please visit our flower store.