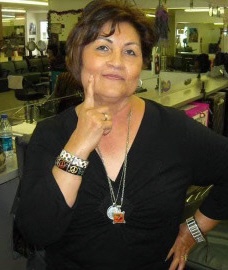 Services for Irene M. Wilson were held private at the family’s request.

Mrs.  Wilson was called to be with the Lord, Friday, January 1, 2021. She was born on May 20, 1950 to Abelardo and Elvira Mata. In 1965 Irene went onto marry the late Joe Bob Wilson Sr. in Lubbock. In 1976 she received her cosmetologist license from Jesse Lee’s Hair Academy. Later she received her Cosmetologist Instructors License and purchased a Touch of Class Hair Studio. On May 20, 1999 Irene purchased Vogue Beauty Academy. She owned and operated the academy up until 2015 prior to her passing. She was a devoted Catholic, a Cursillista, a Guadalupana and a Eucharistic minister for St. Joseph’s and Our Lady of Guadalupe. Irene also participated in the T.V. Ministry Iglesia Marcha and ministered for 1420 am “Dios Iga El Hombre”. She was also involved in jail ministry.

She is preceded in death by her husband Joe Bob Wilson Sr., her mother Elvira Mata, and her three siblings: Abelardo, Tomas,and Mary.

According to local and state guidelines, facemasks will be required at all times during visitation and funeral services. Temperatures will be taken upon entering funeral home

To order memorial trees or send flowers to the family in memory of Irene Wilson, please visit our flower store.