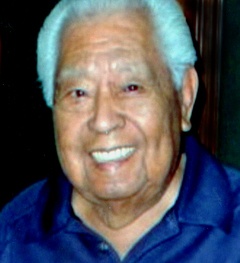 Ignacio “Nicho” Armenta, 95 entered eternal rest on March 26, 2018 at home surrounded by his family.  Services will be at 10:00 a.m. on Thursday, March 29, 2018 in St. Joseph’s Catholic Church with Father Raymundo Manriquez officiating.  He will be laid to rest at the City of Lubbock Cemetery under the direction of Broadway Funeral Directors.  Family and Friends are invited to pray the rosary at 7:30 p.m., Wednesday, March 28, 2018 at St. Joseph’s Catholic Church, 102 N. Ave. P.

Ignacio was born November 29, 1922 in Topeka, KS to Alejandro and Fidencia Armenta. Their family moved to Lubbock in 1923.  He married the Love of his life Ernestina Carrera January 28, 1954.  They were married sixty-four years. He was a devoted member of St. Joseph’s Catholic Church. Ignacio was a barber for over 48 years and worked alongside his brother Lupe at Armenta’s Barbershop on the corner of 4 th Street and Ave. H.   He enjoyed fishing, camping, playing dominos, solitaire, shooting pool, watching old Western movies and most of all, he looked forward to spending time with his family each and every Sunday.  Once retired, he never missed an episode of “The Price is Right”.

To order memorial trees or send flowers to the family in memory of Ignacio Armenta, please visit our flower store.