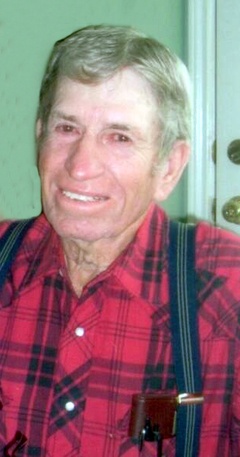 Funeral services for H.C. Gribble, 83, of Grassland will be Saturday, January 2, 2016 at 2 PM at Grassland Church of The Nazarene with Brother James Miller officiating. Burial will be in the Grassland Cemetery under the direction of The Broadway Funeral Directors.

H.C. went to be with the Lord on Tuesday, December 29, 2015. He was born on February 20, 1932 in Grassland to the late William Leonard and Mary Bernice Gribble. He married Mickey Jackson on March 30, 1949 in Grassland and had four children together. He married LuNell Hurley on August 25, 1984 in Lubbock.

H.C. was a farmer in Grassland where he lived all his life. In his younger years, he enjoyed playing softball. He also loved singing and playing his guitar with family and friends. Throughout his life, he raised many types of livestock including horses, pigs, cattle, goats and sheep. He was especially fond of training his border collies to work his livestock.

The Gribble family will be receiving family and friends this Friday, January 1, 2016 from 6-8 PM at Calvillo Funeral Home Chapel in Tahoka. In lieu of flowers, the family requests donations to either the Grassland Cemetery, C/O Terry Laws, 1995 CR HH, Post, Texas 79356 or to Grassland Church of The Nazarene, 151 US Hwy 380, Tahoka, Texas 79373.

To order memorial trees or send flowers to the family in memory of H.C. Gribble, please visit our flower store.