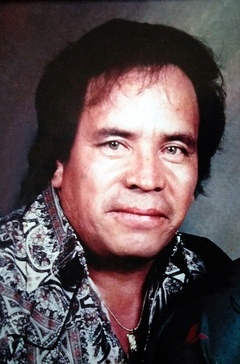 Gonzalo was born July 26, 1934 in McGrew, Nebraska to Leonares & Margarita Ramirez.  He was the first Hispanic to enroll at McGrew High school and was very good at running track as well as playing football & basketball for the “Bobcats”.  He married the late Rosa Ramirez on July 3, 1952 in Bridgeport Nebraska and began working for PYCO in 1978 and retired in 1998. He then worked in maintenance at Plains Coop Oil Mill until he couldn’t work anymore. He was a Pentecostal and enjoyed watching western movies, listening to country music (Merle Haggard) and cheering on the Nebraska Huskers.

He is preceded in death by his wife, Rosa Ramirez; a daughter, Victoria Ramirez.

To order memorial trees or send flowers to the family in memory of Gonzalo Ramirez, please visit our flower store.