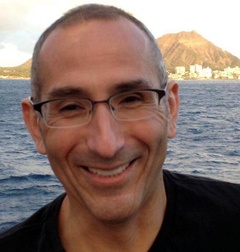 Gaspar Lopez, 55, passed away Sunday, September 3, 2017 in Austin, Texas.  Services for Mr. Lopez will be 10:00 am Friday, September 8, 2017, at The Chapel of Broadway Funeral Directors with Dr. Tom McGovern officiating.  Burial will follow in Resthaven Memorial Park under the direction of Broadway Funeral Directors.  A prayer service will be held 7:00 pm Thursday at Broadway Funeral Directors, at 1901 Broadway.
Gaspar was born June 27, 1962, in Lubbock to Luis and Paula (Serna) Lopez from Lubbock, Texas.  He graduated from Dunbar High School and afterwards moved to San Jose California where he later received his associates degree at San Jose Community College. He then moved to San Francisco, California where he worked as a Licensed Chemical  Dependency  Counselor for Kaiser Permanente, City of San Francisco, Center for Open Recovery, National Council on Alcoholism and Ohlhoff Recovery Programs. He loved his job and his passion in life was to help others and he did so in a way that made people see the beauty that can be found in life. He also enjoyed traveling the world, watching movies, and was a big fan of the Dallas Cowboys.
He is survived by his mother, Paula Lopez, two brothers, Luis Lopez Jr, Francisco Lopez of Lubbock; a sister and brother-in-law, Manuela & Charles Thibodeaux of Austin; twelve nieces and nephews.
He is preceded in death by his father, Luis Lopez
The family would like to give a special thanks to all his friends in the Northern California area for their love and support of Gaspar through his time in need.
In lieu of flowers, the family suggests memorials to your favorite charity, or you may send a donation to Where It All Begins, PO Box 441, Lubbock, Texas 79408.
To order memorial trees or send flowers to the family in memory of Gaspar Lopez, please visit our flower store.