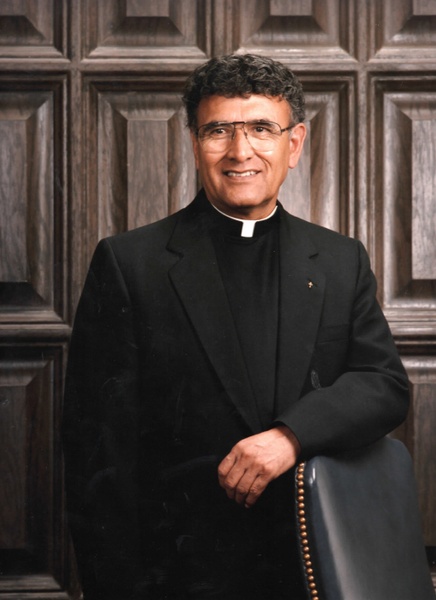 Father Cornelio C. Ramirez SCA, 91 passed away April 8, 2019 in Lubbock.  Funeral Mass for Father Ramirez will be 10:30a.m. Friday, April 12, 2019 at Christ the King Cathedral with Bishop Robert Coerver officiating.  Rosary for Father Ramirez will be 7:00p.m., April 11, 2019 at Broadway/Calvillo Funeral Chapel.  Burial will follow at Peaceful Gardens Memorial Park under the direction of Broadway/Calvillo Funeral Home.  Viewing will be on Thursday, April 11, 2019 starting at 1:00p.m.

Father Ramirez was born on September 16, 1927 in San Saba, Texas to Crecencio and Juanita Ramirez.  He entered the Irish Pallottine Fathers Society in Thurles, Ireland on May 22, 1954.  In 1960 he was given permission to study for the priesthood.  Having passed the Entrance Examination, he studied philosophy and theology at St. Patrick’s College, Thurles, Ireland from 1961 to 1967.  Dr. Lawrence M. de Falco, Bishop of Amarillo, ordained Cornelio Ramirez to the priesthood at St. Joseph’s Church in Lubbock on the 18th of June 1967.  He also said his first Mass at St. Joseph’s Church.  Father Ramirez had numerous assignments, his first being to Abilene, Texas.  He was also assigned to Brownfield, and later to St. Joseph’s Church in Lubbock and was present during the tornado of 1970.  In 1972, he was assigned to Stephenville.  He served over four counties during that time namely; Erath, Comanche, Hood, and Somervell with churches in Stephenville, Comanche, Dublin, Deleon, and Granbury.  Other parishes that he served were Seminole, Seagraves, New Deal and St. Patrick’s in Lubbock (1997). In 2003, Father Ramirez after a total of thirty-six years priestly ministry, retired from St. Patrick’s in Lubbock.  He has helped in parishes and has generally remained active until his health prevented him from ministering.  Some of his greatest hobbies was playing golf and tennis during his spare time.

He is preceded in death by his parents; a sister Juanita R. Segura, and two brothers; Julian and Candido Ramirez.

To order memorial trees or send flowers to the family in memory of Fr. CORNELIO RAMIREZ, please visit our flower store.