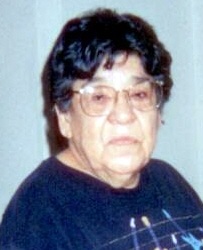 Eva was born August 29, 1924 in Cameron, TX to Ramon & Guadalupe Teran. She married the late Constancio Alonzo on September 24, 1949 in Lubbock. He later passed away in January of 1993.  Eva was a homemaker and opened her home to everyone making her everyone’s Wela. She was a jack of all trades, a hair dresser and her green thumb gave her a passion for flowers which could be easily seen in her yard & garden.

She is preceded in death by her husband, Constancio Alonzo Sr.; six sisters, a brother, and her parents.

The family would like to give a special thanks to Gentiva Hospice and Girling Health Care for their special care of Mrs. Alonzo.

To order memorial trees or send flowers to the family in memory of Eva Alonzo, please visit our flower store.