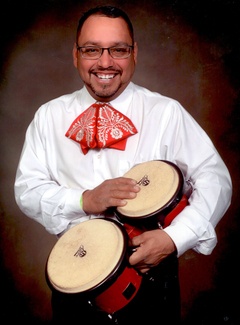 Esteven “Steve” Aguilar, 46 of Lubbock, passed away March 26, 2017 in Lubbock.  Friends and family will gather Sunday, April 2, 2017 at 6:00 p.m., in The Chapel of Broadway Funeral Directors for the Recitation of the Rosary.  A Funeral Mass will be celebrated Monday, April 3, 2017 at 10:00 a.m., in St. Elizabeth University Parish, with Father Emiliano Zapata, officiating.  Interment will follow in Peaceful Gardens Memorial Park under the care and direction of Broadway Funeral Directors.

Steve was born March 21, 1971 to the late Cipriano and Pauline Aguilar. He was a very talented percussionist, playing in many bands and made long lasting friendships with his fellow musicians.  There was not a song in the world Steve could not play. He developed a love for many different hobbies over the course of his life, NASCAR Racing, model airplanes, air shows and especially fishing. He was a devoted father to his two sons, Stephen Patrick Aguilar and Bobby Sweet Aguilar with whom he shared his favorite pastimes.

He is preceded in death by his parents and an infant sister.

He is survived by his two children, Stephen and Bobby; a step son Derek; Step daughter Vanessa; Eleven brothers and sisters Tony (Rosie), Johnny (Josie), Angie (David), Frank (Margie), Rosie, Linda (Leo), Miguel (Lou), Isabelle (Stan), Gabriel (Rosa), Estella (Darrell) and his twin brother Samuel (Patricia). He is also survived by four grandchildren and a host of nieces and nephews who loved they’re Uncle Steve. He will be greatly missed by all.

To order memorial trees or send flowers to the family in memory of Estevan Aguilar, please visit our flower store.