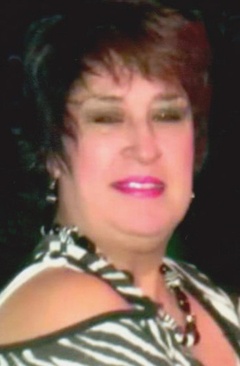 Visitation for Erminia "Mi n i" Roberson,60,of Lubbock will be from 3 PM till 9 PM Monday, March 30, 2015 with a prayer services being held at 7 PM at Broadway Funeral Directors Chapel. Funeral services will be on Tuesday at 10 AM at Lubbock Dream Center with Rev. Joshua Ramirez officiating. Burial will be in Peaceful Gardens Memorial Park under the direction of Broadway Funeral Directors.
Erminia went to be with the Lord on Monday March 23, 2015. She was born on March 13, 1955 in Lubbock to the late Calistro Sr. and Josefina Vasquez. She married Larry Roberson in 1979 in Lubbock, he preceded her in death in May of 19 8 5.
Erminia was retied from Texas Instruments, and was a homemaker. She loved to do arts and crafts, dance, but most of all spend time with her family.
She is preceded in death by a brother Lyle Vasquez in 1995.
Survivors include a son Mark Caraveo and Sylvia Munoz of Lubbock, three daughters Felisha Roberson and Dornell Moore of Lubbock, Alexandrea Roberson and Jerry Watley Jr of Lubbock, Jacqueline Roberson and Daniel Pendgraft of Lubbock her mother Josefina Vasquez of Lubbock, five brothers Calistro "Junior" Vasquez, Freddy Vasquez, Danny Vasquez, Paul Vasquez and Little Joe Vasquez all of Lubbock, four sisters Tana Rodriguez, Irma Flores, Angie Salas and Rachel Vasquez all of Lubbock, eight grandchildren and three great grandchildren.

To order memorial trees or send flowers to the family in memory of Erminia Roberson, please visit our flower store.