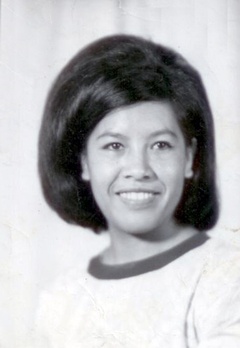 Prayer of Devine Mercy Chaplet for Emelda Andrade 70 of Lubbock will be Friday, September 9, 2016 at 6:30 PM at St. Joseph's Catholic Church, followed by a rosary at 7:00 PM. A celebration of funeral mass will be on Saturday at 10 AM at St. Joseph's Catholic Church with Father Martin Pina officiating. Burial will be in Peaceful Gardens Memorial Park under the direction of The Broadway Funeral Directors.

Emelda went to be with the Lord on Sunday, September 4, 2016. She was born on September 6, 1945 in Huandoval, Ancash Peru to the late Maximo Castillo and Paula Agreda.

Emelda was raised in Peru where she was a hair Stylist by trade. She moved to Lubbock in 1965 to work as a personal hairstylist. When she came to America she was taken in by the family of the late Gerardo and Eustacia Puga. She then met Juan P. Andrade who she later married on June 2, 1971 in Lubbock.

Emelda was a very active member of St. Joseph's Catholic Church where she served as a lector and alter server. She loved to bake and cook for her family and friends. She was humble and full of Amor.

To order memorial trees or send flowers to the family in memory of Emelda Andrade, please visit our flower store.