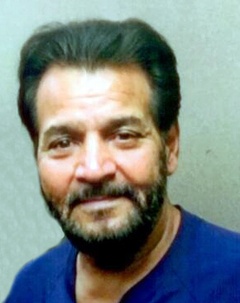 Eli went to be with the Lord on Saturday, June 3, 2017.  He was born on Thursday, November 25, 1954 in Lubbock to the late Manuel and Amparo Garcia. A lifelong resident of Lubbock, everyone who knew Eli, knew he had a great sense of humor- he loved to joke and clown around,especially playing with his kid's ears.His family was everything to him and he was proud of his children and grandchildren.  He was a licensed professional wrestler under the name "El Solitario".  He coached a volleyball team, "The Bad Boys" and had numerous trophies from their victories.  An avid Dallas Cowboys fan, Eli never missed a kick-off; and also enjoyed collecting classic cars, motorcycles and watching UFC.  He worked for Southwestern Concrete, Ed Curbo Construction and until his passing, the Walmart #3826 at Marsha Sharp

To order memorial trees or send flowers to the family in memory of Elias Flores, please visit our flower store.