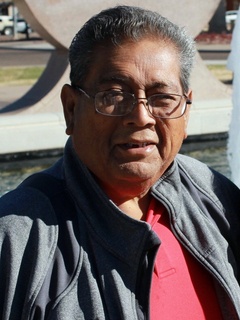 Rosary for Elasar "Chapo" Andrade 65, of Lubbock, will be held Thursday September 1, 2016, at 7:00 pm in The Chapel of Broadway Funeral Directors. Funeral Mass will be celebrated 10:00 am Friday, September 2, 2016 in St. Joseph's Catholic Church with Father Martin Pina officiating. Burial will follow in Peaceful Gardens Memorial Park under the direction of Broadway Funeral Directors.

“Chapo” went to be with the lord on August 28, 2016. He was born July 14, 1951 in Lubbock to Manuel Sr. & Ynez Andrade. He married Beatrice Salinas on August 22, 1970 in Lubbock. He was a catholic, and a devoted member of the St. Joseph's Catholic Church alter society. He went on to retire from Texas Tech as a sanitation truck driver, after twenty five years of service. He loved spending time with his family, especially having cookouts with them. He was a very proud grandfather and an avid Dallas Cowboy fan.

He is preceded in death by his parents and a brother Oscar "Big O" Andrade.

To order memorial trees or send flowers to the family in memory of Elasar Andrade, please visit our flower store.