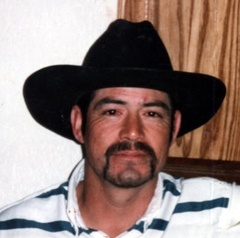 Funeral Mass for Egiso “Alex” Gomez 59, of Lubbock will be held on Tuesday July 18, 2017 at 10:00 am in St. Patrick’s Catholic Church (1603 Cherry Ave) with Father Joseph Thanavelil officiating. Rosary will be held 7:00 pm, Monday, July 17, 2017 in The Chapel of Broadway Funeral Directors. Cremation arrangements we’re made under the direction of Broadway Funeral Directors.

Alex went to be with our Lord on Thursday, July 13, 2017. He was born November 18, 1957 in Lamesa, to Egiso Garcia and Maria Gomez. Alex loved spending his time playing softball, fishing and being a jokester. Working many years for The Baker Building performing maintenance as well as for the MCM Eleganté Hotel, he was known to be very independent and a diligent worker.

He is preceded in death by his father Egiso Garcia; Brother Robert Guzman and a uncle Fransisco “Indio” Gomez.

To order memorial trees or send flowers to the family in memory of Egiso Gomez, please visit our flower store.