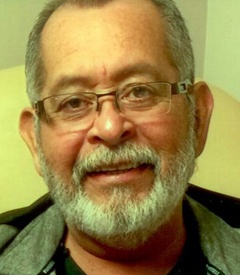 Rosary for Eduardo “Eddie” Narvaiz, 61 of Lubbock will be today at 7 PM at The Chapel in Broadway Funeral Directors. A celebration of mass will be held Tuesday at 2 PM in St. Joseph’s Catholic Church with Father Andres Mendoza officiating along with Monsignor Jim O’Connor assisting. Interment will immediately follow in Peaceful Gardens Memorial Park under the direction of Broadway Funeral Directors. Eddie closed his eyes on earth and opened his eyes in heaven on Saturday, September 5, 2015 in Lubbock. Eddie was born on November 21, 1953 in Ralls to the late Cruz Sr. and Petra Narvaiz. He married Tina Velez on August 17, 1985 in Lubbock. In 1973 he graduated from Lubbock Cooper High School and went on to remain forty one years with Lubbock Cooper ISD as a teaching assistant before retiring. He was a loving father and a remarkable grandfather. He was a very outspoken and humorous man. While listening to music and dancing were some of his passions, Eddie also treasured watching the re-runs of the Andy Griffin Show, I Love Lucy and the Golden Girls.

He is preceded in death by his parents and by a brother Cruz Narvaiz Jr.

Those left to honor and cherish his memory are his wife of thirty years Tina of Lubbock; A son Xavier Narvaiz of Lubbock; daughters Gabby Narvaiz and Sandra Saenz both of Lubbock; a granddaughter Adalyn Grace Narvaiz of Tahoka his pride and joy; Sister Ninfa (Ramey) Vigil of Lubbock; A host of nieces and nephews.

The family would like to offer their utmost gratitude to Calvert Home Health Care; Renal Center, Dr. Warmouth and Dr. Jose Allas; Covenant Health System for their exceptional care of Eddie.

To order memorial trees or send flowers to the family in memory of Eduardo Narvaiz, please visit our flower store.