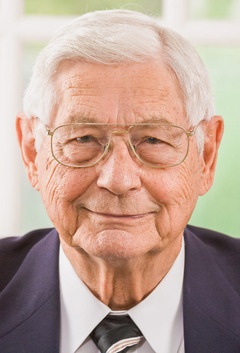 Services for Arthur Conrad Sucsy, 94, of Lubbock will be at 2:00 PM Wednesday April 29, 2015 at the Chapel of Broadway Church of Christ, with Tim Talley officiating. Burial will be at Dallas-Fort Worth National Cemetery under the direction of Broadway Funeral Directors.

He married Elnora Jean Wilson of Barbourville, KY in 1946. At the close of World War II, they returned to Cornell, where Dr. Sucsy completed his PhD. in Organic Chemistry.  Dr. Sucsy began his career with the Rohm & Haas Company of Philadelphia in 1948 and remained with the Company until his retirement in 1985. During that time, he was a Laboratory Chemist, Field Salesman, Sales Manager of the Italian Subsidiary, International Marketing Manager for Pesticides, International Marketing Manager, and Technology Transfer Manager. While in Italy, he served on the board of the American School of Milan.

The elder Sucsys came to Lubbock in 1995. Since that time, Dr. Sucsy engaged in volunteer and substitute work with the Lubbock Independent School District, Trinity Christian Schools, and Lubbock Christian University.

He retired from LCU in 2013 where he served as the environmental compliance officer for many years. He is survived by his wife, Jean W. Sucsy, and they recently celebrated their 69th wedding anniversary. He is also survived by two sons, David and Steven, who live in Lubbock with their families; and his daughter, Karen Woodward, who lives with her family in Saint Louis. Other survivors include nine grandchildren and fourteen great-grandchildren, and his brother, Dr. Robert W. Sucsy.

The family suggests donations to Lubbock Christian University in lieu of flowers.

To order memorial trees or send flowers to the family in memory of Dr. Arthur Sucsy, please visit our flower store.