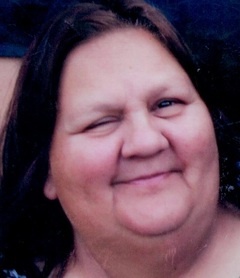 Rosary for Dora Rivera Flores, 53 of Lubbock will be this evening at 7 PM in the Chapel at  Broadway Funeral Directors. Funeral Mass will be celebrated on Wednesday at 10 AM in St. Patrick's Catholic Church with Monsignor James O'Connor officiating. Burial will follow in Peaceful Gardens Memorial Park under the direction of Broadway Funeral Directors.
Dora went be with the Lord on Friday April 10, 2015. She was born on October 2, 1961 to the late Gumercindo and Ramona Rivera. Dora was a great homemaker, she loved to play bingo, and text all of her friends and family. She loved spending time with her grandchildren who were all special to her.
She is preceded in death by three brothers Benito Rivera, Gilbert Rivera and Roberto Rivera.
Survivors include the love of her life of ten years Eufemio Mata of Lubbock; a son Robert Rivera of Lubbock; a daughter Ashley Gomez of Lubbock; her brothers G.C. "Chayo" and Felipa Rivera of Lubbock, Richard and Velma Rivera of Abernathy, Tony and Helen Rivera of Lubbock, Roy and Dalia of Lubbock, Manuel "Duke" and Sally of Florence; her sisters Cecilia Quintanilla of Lubbock, Frances Guzman of Lubbock, Dolores and Dionicio Cantu of Lubbock, Jaine Guerra of Lubbock; six grandchildren and a host of nieces and nephews who loved her dearly.

To order memorial trees or send flowers to the family in memory of Dora Flores, please visit our flower store.