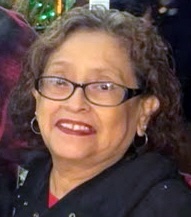 Dolores N. DeLeon was born September 20, 1953, in San Marcos to Juan & Paz Nombraña. She graduated from Estacado High School in 1971 and married Samuel H DeLeon on July 1,1977 in Lubbock.  She enjoyed watching cooking shows; but shopping with her daughter, eating out with her family and spending time with her grandchildren were the moments she cherished more than all. She was very proud of her boys and was often found talking to many about their many accomplishments.

In the early morning of February 17, 2022, Dolores N DeLeon was called from this earth and into the arms of her eternal Father.  Those left to cherish her memory are her mother, Paz Nombraña; her daughter, Chasity N. Tovar (Daniel) of Lubbock; three brothers, Mike Nombraña, Richard Nombraña, Phillip Nombraña all of Lubbock; four sisters, Stella Gomez, Frances Silvas, Sylvia Cristan, Rosa Berumen all of Lubbock; four grandchildren; two great grandchildren.

To order memorial trees or send flowers to the family in memory of Dolores DeLeon, please visit our flower store.