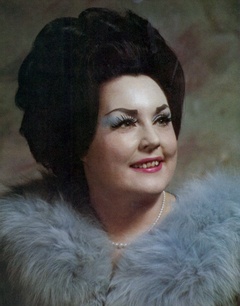 Charlene Nell Finkner went to be with our Lord Saturday, August 6, 2016 in Lubbock.  Family and friends will gather to celebrate her life on Tuesday, August 9, 2016 at 10:00 a.m. at The Chapel of Broadway Funeral Directors with Rev. John Ballard officiating. Burial will follow in the Floyd County Memorial Park in Floydada under the direction of Broadway Funeral Directors.

Charlene was born September 21, 1927 in Floydada to the late Charlie & Nellie Fulkerson. She married the love of her life, Donald Finkner, on June 8, 1947 in Floydada.  She was a graduate of Wayland Baptist College and Texas Tech University receiving a Bachelor of Science Degree in Education. Also, she was a graduate of Glen Ray Arnold Modeling School. Charlene was a 3 rd grade school teacher in Floydada for a few years before she and Don decided to enter the fashion industry. She became a successful business woman and a Lubbock icon. She owned and operated Charlene’s, a woman’s dress shop, in Lubbock from 1960 until she retired in 1990.  She produced television commercials for her shop that aired on Channel 13, KLBK, for 7 years. Charlene made a positive impact on the people in her lives, whether it be her students, her customers or her family.  She was an incredible strong woman of deep faith.  She was full of joy; her smile and her laughter were infectious.

Among her many accolades, Mrs. Finkner was president of the American Business Women’s Association and she received the Woman of the year award in 1965. She was the Golden Spread Chapter Sweetheart in 1968.  In February 1969 she was presented a citation from Wayland Baptist College for her work on the Executive board. She was elected Alpha Kappa Gamma president in 1974, Alpha Beta Chapter.

Mrs. Finkner is preceded in death by her parents, Charlie and Nellie Fulkerson, her husband, Donald Finkner and her sister Erma Boenig.

To order memorial trees or send flowers to the family in memory of Charlene Finkner, please visit our flower store.