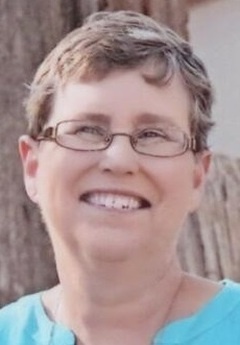 Betty O’Rourke of New Home, age 61, passed away on Wednesday, January 20, after a brief battle with cancer. She was born on January 16, 1955 in Wichita Falls, Texas to Howard and Virginia McCrary. She graduated from Burkburnett High School in 1973 and Midwestern State University in 1976 with a degree in biology. She became an officer in the United States Marine Corps in 1978, and spent the next twenty years in active duty or reserve service.  Betty graduated from the University of San Francisco with degrees in nursing and theology in 1985. She transferred to the United States Navy to use her nursing degree. She married Dennis O’Rourke in 1987 and they had two daughters. In 1991, she was deployed to Operation Desert Storm as part of Fleet Hospital 15 and served in Saudi Arabia. She retired with the rank of Commander from the Navy in 2000. She was a home health nurse for many years and briefly a science teacher. Betty was active in the ACTS community and spent many years teaching and coordinating for RCIA programs. Betty loved helping people build their relationship with God, balcony views at the beach, stray cats and dogs whom frequently showed up at her door, and any new experiences life had to offer.

She is preceded in death by her husband, Dennis, who is finally fulfilling his promise to dance with her in heaven. She is survived by: her daughters, Katie (Daniel) Ford and Meghan O’Rourke; mother, Virginia McCrary; sisters, Suzy (Greg) Williams and Peggy (Galen) Austin; and numerous nieces and nephews. A rosary will be held Friday, January 22 at 7pm at Broadway Funeral Directors. A funeral mass will be celebrated, Saturday, January 23 at 10am at Holy Spirit Catholic Church with Monsignor James O’Connor, officiating.  Arrangements are under the direction of Broadway Funeral Directors. In lieu of flowers, memorials can be made to University of San Francisco at P.O. Box 45363, San Francisco, CA 94145.

To order memorial trees or send flowers to the family in memory of Betty O'Rourke, please visit our flower store.