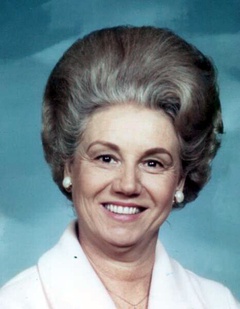 Funeral services celebrating the life of Betty Jean Brooks, 88 of Lubbock will be Friday at 10:00 a.m., November 6, 2015 in the Chapel at Broadway Church of Christ with Karl Ihfe, Senior Minister officiating. Interment will follow in Resthaven Memorial Park under the direction of Broadway Funeral Directors.  The family will receive friends and have visitation at the funeral home on Thursday evening, November 5, 2015 from 5:00 to 7:00 p.m. Mrs. Brooks passed away November 4, 2015 in Lubbock. She was born December 11, 1926 in Sherman, TX to the late Dewey and Ethel McDonald.  She was raised in Sherman and her family moved to Lubbock in 1942. She attended Lubbock High School and graduated in 1944.  She graduated from Texas Tech University with a degree in business; and was a member of Delta Delta Delta Sorority.  While attending Texas Tech, she met Ernest Don Brooks.  They were married on March 7, 1947 in Lubbock. He preceded her in death. She was an active member of Broadway Church of Christ and was involved with PTA.  She worked in retail after her boys left home, but her primary devotion was being a mother, homemaker and wife. She is survived by two sons, Craig and wife Nelda of Katy, TX. Barry of Dallas, TX; and four grandchildren, Ashley Brooks of Austin, Megan Davila of Corpus Christi, Katherine Brooks of San Francisco, CA and Alex Brooks of New Orleans, LA.

To order memorial trees or send flowers to the family in memory of Betty Brooks, please visit our flower store.