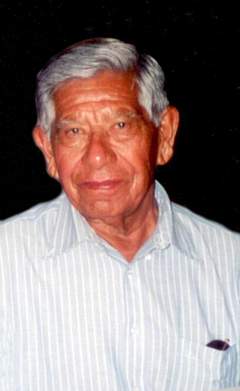 Rosary for Bartolo “Bart” Gonzales Jr. 100, of Lubbock will be this evening, at 7:00 pm in The Chapel of Broadway Funeral Directors. Funeral Mass will be celebrated 2:00 pm Friday, December 9, 2016 in St. Patrick's Catholic Church with Monsignor Jim O’Connor officiating. Burial will follow in Peaceful Gardens Memorial Park under the direction of Broadway Funeral Directors.
“Bart” went to be with our lord on Tuesday, December 6, 2016. He was born April 16, 1916 in Jesus Maria Ranch, Texas to Bartolo & Carmen Gonzales. He married Guadalupe Arredondo in 1942 in Raymondville. He was a catholic, and a devoted member of the St. Patrick's Catholic Church. As well as he enjoyed working on his old cars and tractors.
He is survived by a son Samuel “Sam” Gonzales of Lubbock; Grandsons Nicolas Gonzales and Chris Gonzales; Four Great Grandchildren Alissa, Lexi, Layla and Ashton Gonzales all of Lubbock.
He is preceded in death by his parents and his loving wife.
To order memorial trees or send flowers to the family in memory of Bartolo Gonzales Jr., please visit our flower store.