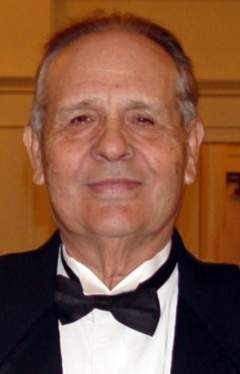 Ambrosio “Lefty” Gonzales, 81 of Slaton passed away January 6, 2015 in Lubbock.  A rosary will be held this evening at 7:00 pm, in The Chapel at Broadway Funeral Directors. Funeral Mass will be celebrated at 2:30 pm Saturday, January 10, 2015 in St. Joseph’s Catholic Church of Lubbock with Father Martin Pina officiating.  Burial will follow in Peaceful Gardens Memorial Park under the direction of Broadway Funeral Directors.

Ambrosio was born December 7, 1933 in Cameron, TX to Nicanor & Virginia Gonzales. He married Natividad Dominguez on January 3, 1983 in Lubbock. He was a catholic and liked playing bingo. Some of his other beloved hobbies included watching wrestling and the Dallas Cowboys. But his ultimate pride and joy was watching his children and grandchildren play sports.

To order memorial trees or send flowers to the family in memory of Ambrosio Gonzales, please visit our flower store.